For years I’ve done all the grooming on our dogs. The last year or so my wife has begun to help since it can be quite a task on me. But she won’t touch toenail clippers; she doesn’t even like to be home when it’s that time. Why? Because of the risk of cutting the nail too short, into the quick, and causing it to bleed. It is at least slightly painful to the dog and fairly stressful for them and you. The bleeding, depending on the dog and the cut, may stop fairly quickly and easily by holding pressure on it with a cotton cloth or the like. But more often than not its good to take more than that to stop the bleeding; thankfully the pain seems to stop long before the blood.

Although I’ve done this for years (I was a manager at a pet store in my early 20’s and cut a lot of cat and dog nails and trimmed more than a few bird nails and beaks) I still am a bit apprehensive about cutting my dogs nails despite my experience doing it. Even though I hate to hurt any animal, I really hate to cause pain to my own “fur kids”! Usually I can accomplish the task without incident but there are still the occasional mishaps, like happened this week, prompting this post.

Before I go any further I want to make a couple of points.

There are products on the market made specifically to stop the bleeding caused my cutting into the quick (or there were years ago). When I worked at the pet store we sold and used styptic powder. It is essentially a powdered form of the styptic pencil men (and women I reckon) use to stop the bleeding after they cut themselves while shaving; the pencil burns – I know from my own use – so I assume the powder does, too, though it only does so for a short time.

One day at the pet shop I cut the quick on on of our puppies whose nails I was trimming. We happened to be out of styptic powder, both in our grooming supplies and on the shelves. And this pup would not stop bleeding no matter how long we help pressure on it or what we used to do so. Suddenly I had an idea: Superglue! It was used in combat situations to close wounds and by sports trainers so why not try it on the pup?

After a quick walk down a few storefronts (we were in a shopping mall) to a dollar store I brought the superglue back to where the pup was and got ready to try out my idea. I cleaned the blood off with a clean paper towel and then applied one drop of the glue on the tip of the bleeding nail. I then quickly applied pressure to the glue with a cotton ball for about 20 seconds. After the short wait I gently peeled the cotton ball off, leaving a small piece “glued” to the end of the nail. No more bleeding! The idea had worked just as I’d hoped. And I’ve been using it for 20+ years since. 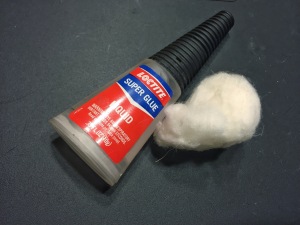 Superglue and a cotton ball

There are a couple more points to keep in mind when using this tip.

As with any first aid-type situation it’s better to have the needed items (and know how to use them) and never need them than to need them just once and not have them (or know how/be prepared to use them).

I hope this idea and article are helpful to you. If you choose to cut your pet’s nails there’s a good chance you’ll have occasion to use it.