The human condition, condensed to 17 syllables. We wander aimlessly about, clueless to how lost and broken we are; desperately in need of a Savior.

1 John 4:14-15  And we have seen and testify that the Father has sent his Son to be the Savior of the world. Whoever confesses that Jesus is the Son of God, God abides in him, and he in God.

Inspired by this week’s episode from Ronovan Writes.

I spent quite a while pondering the thoughts shared by Chèvrefeuille, the host at Carpe Diem Haiku Kai, on the latest challenge which is delusion, #706, before I was able to put this post, the haiku and haiga together. In his thoughts he pondered upon the idea of delusions in the religions of the world, including the question of if the concept applies to Christianity. My best understanding of his thoughts are he is unsure; my beliefs  are solid and clear.

I suppose I should preface my remarks with a couple of things. I in no way challenge the belief or faith of Chèvrefeuille; I’m using his post as the fuel I think it was intended to be, to think and write. And for full disclosure I state my beliefs and faith: I am a Christian who believes in the God of the Bible, as He is revealed in His inspired, infallible Word. I believe in a literal seven-day creation and that the accounts and persons of Scripture are just that- actual accounts not allegorical tales (except in the obvious and traditionally understood passages which are, mostly, contained in the psalms and wisdom books). I hold as true the traditional confessions of the faith including such things as The Apostles Creed.

I agree there is delusion in all the religions he mentioned, including Christianity. But I believe that other religions are all delusion; reconciliation to God the Father is only through His Son Jesus Christ.

The delusion in Christianity is the blinding of people to the truth, which is revealed through the Holy Spirit. Those who are “blinded” still see the message of the cross as foolishness while believers know it is the power of God to save us. (See 1 Corinthians 1:18-21) 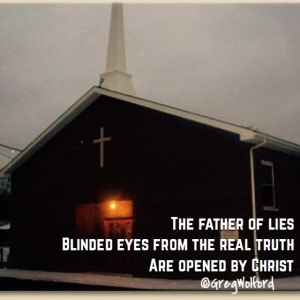 Again, I want to make it perfectly clear I am not making a personal attack on Chèvrefeuille. I am stating my solid faith and belief and am not apologetic for that.